Called by God into the Fraternity of Francis, we live in Simplicity, Servanthood, and Joy, renewing the spirit of Mother Colette Hilbert, "In all things Charity."

Commissioning of Chapter 2022 Delegates at the
2021 Forum 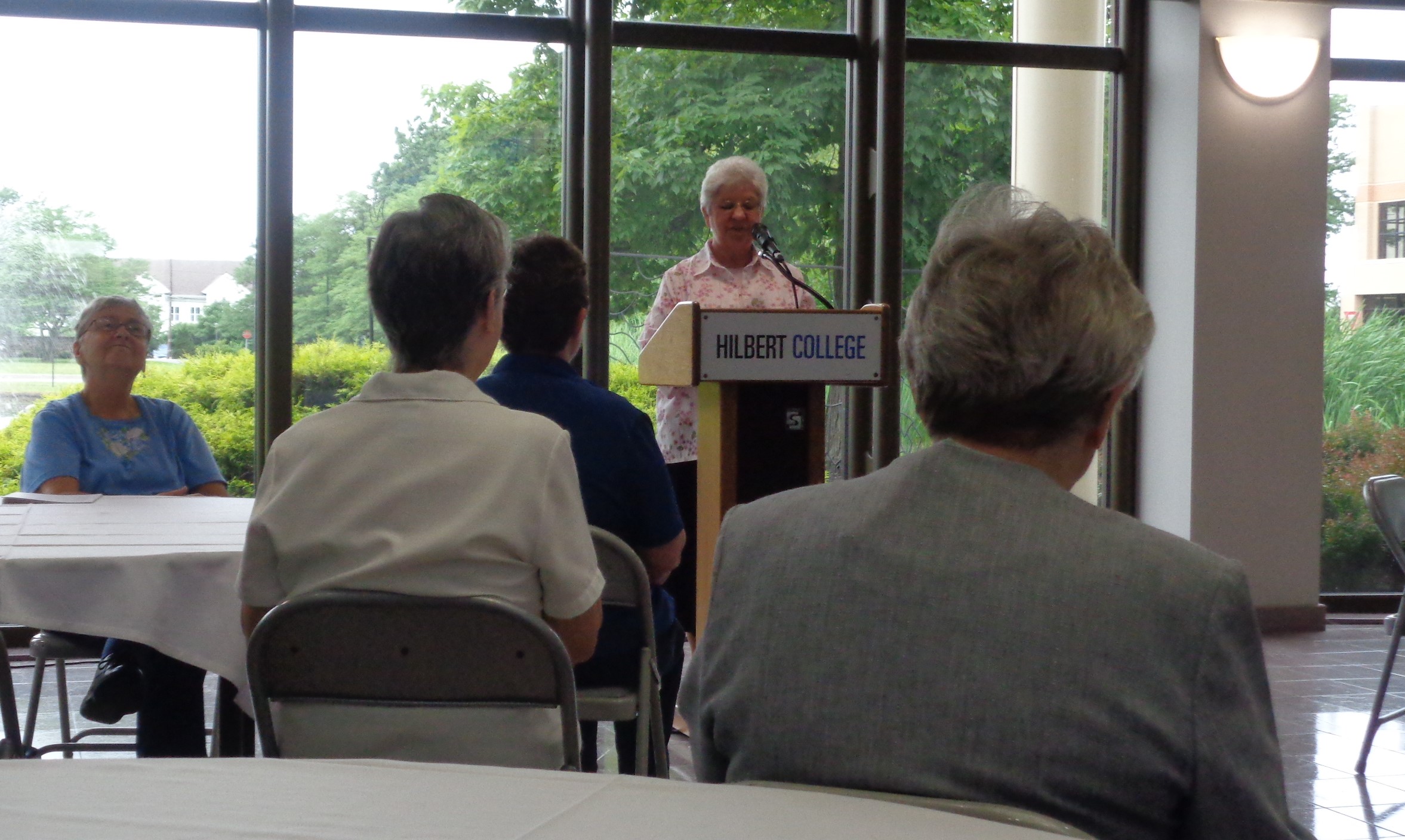 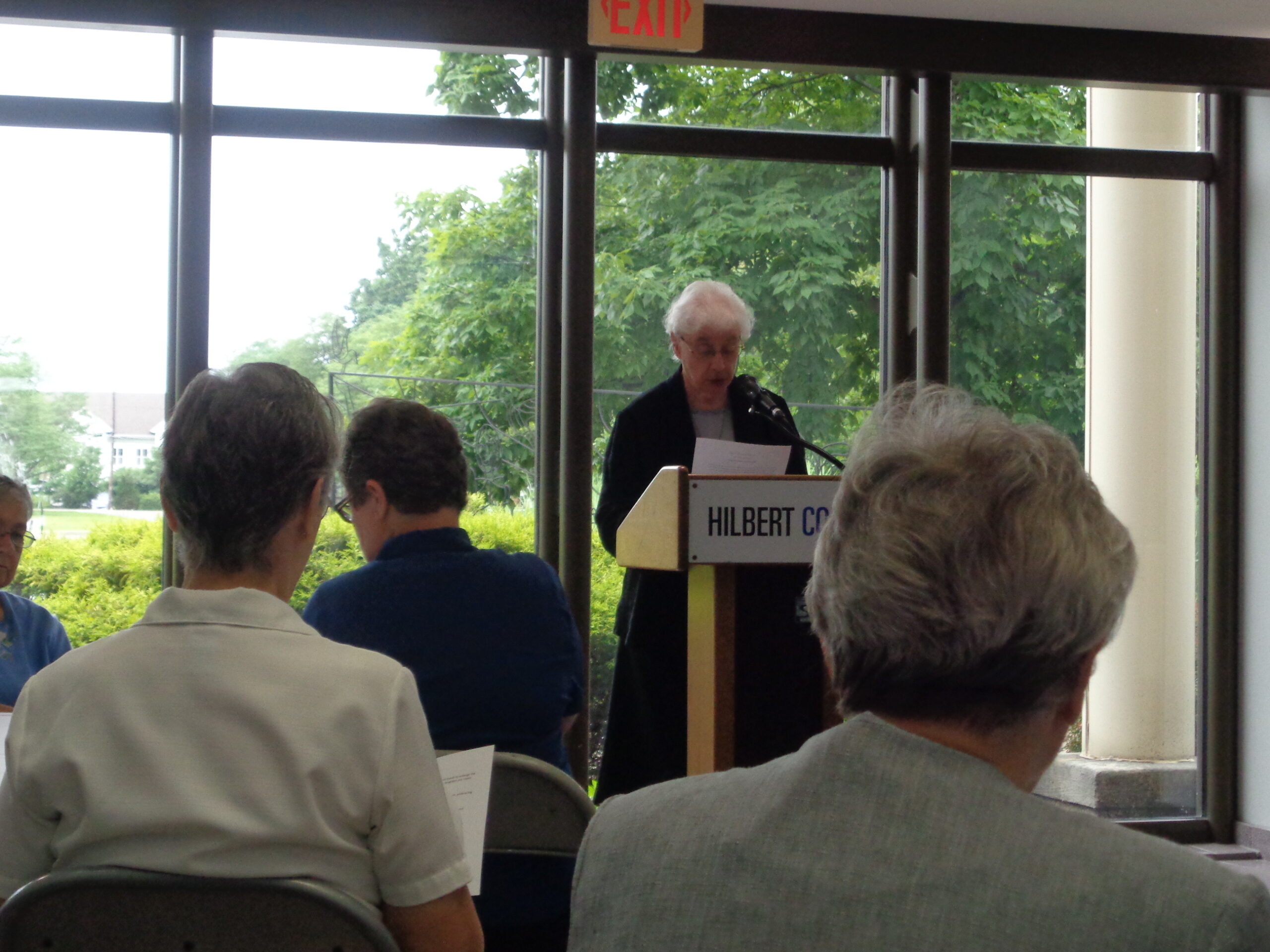 FSSJ Forum 2021:  We Embrace Our Sacred Journey
We Are Made for These Times 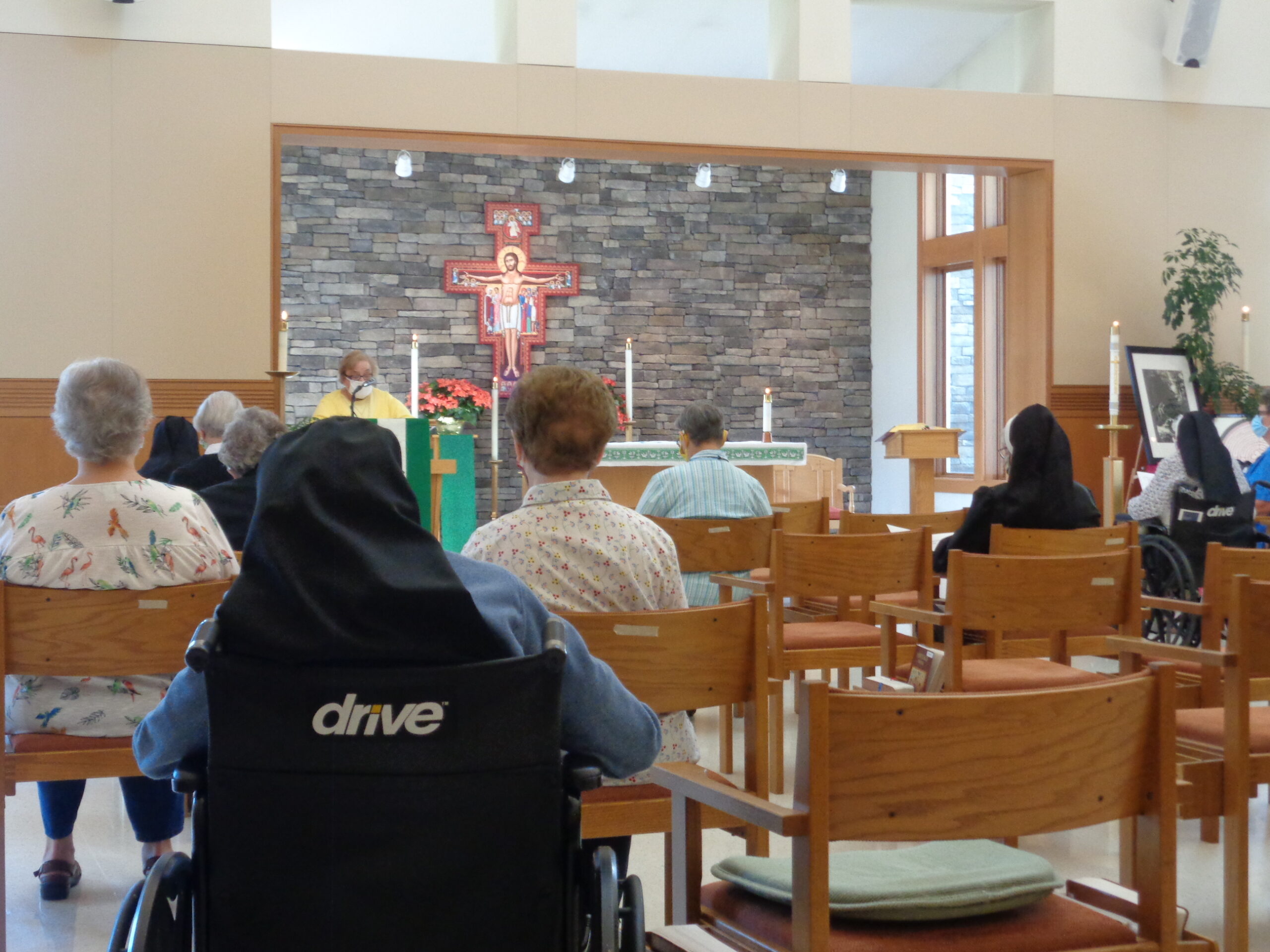 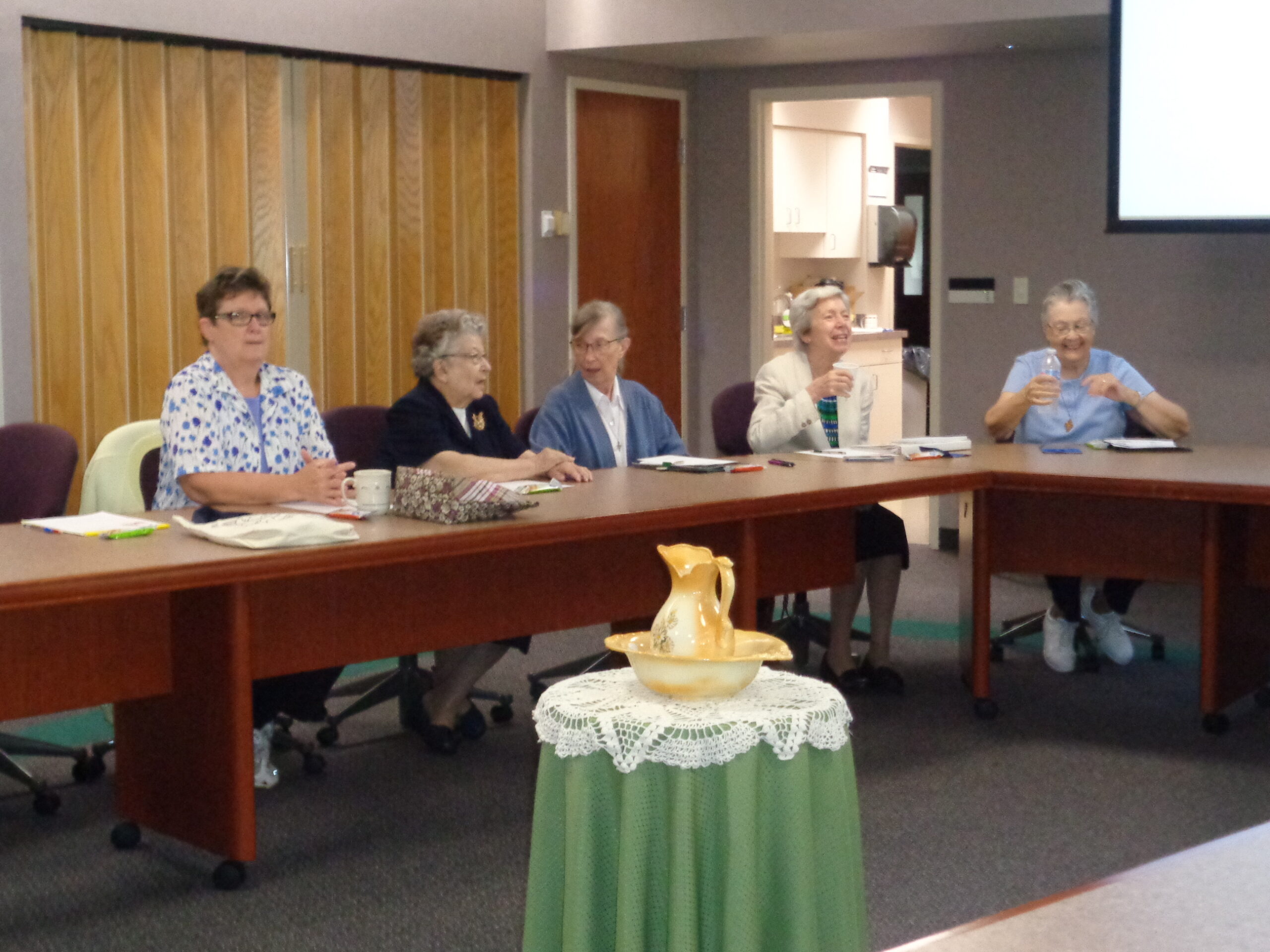 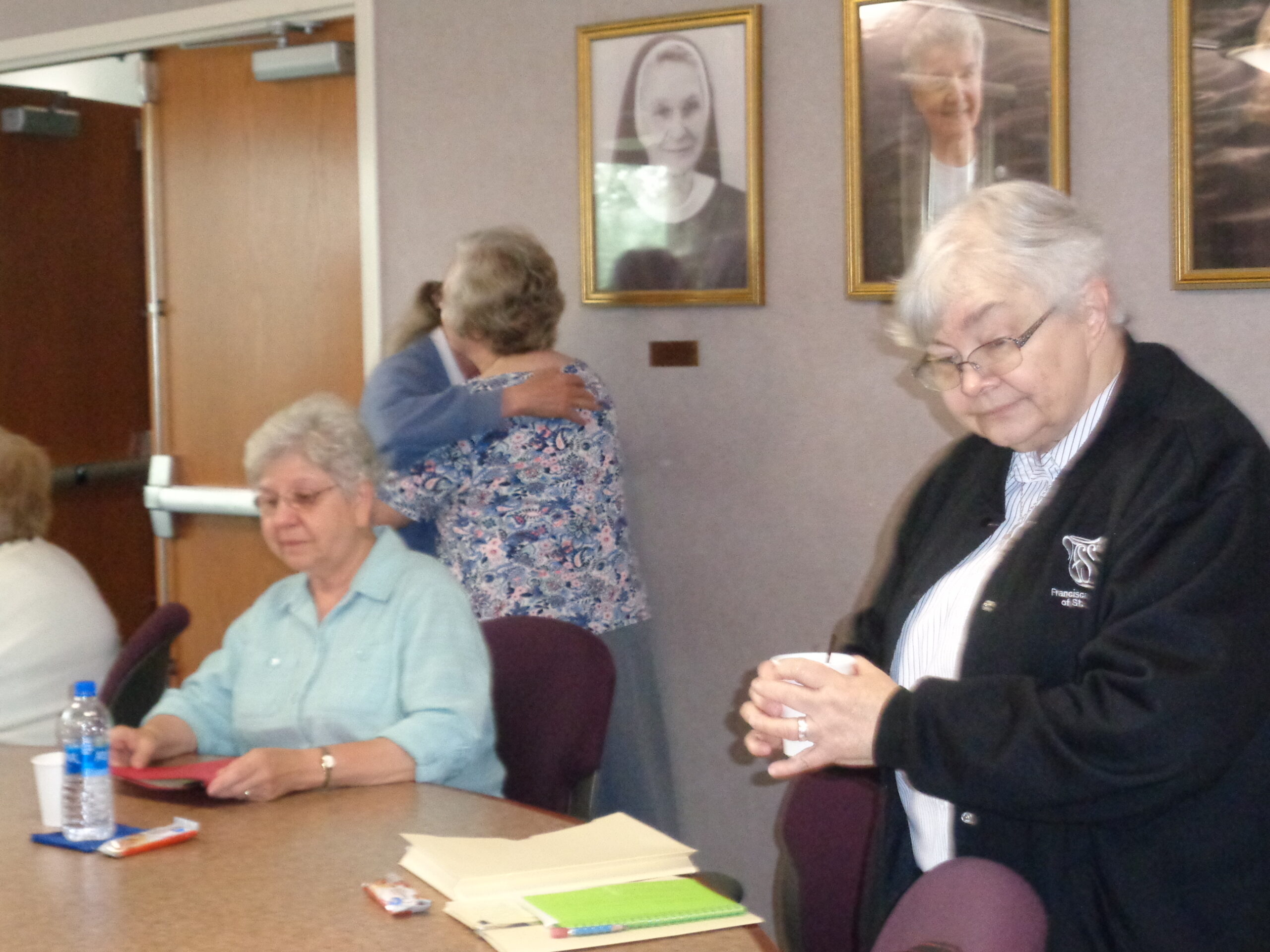 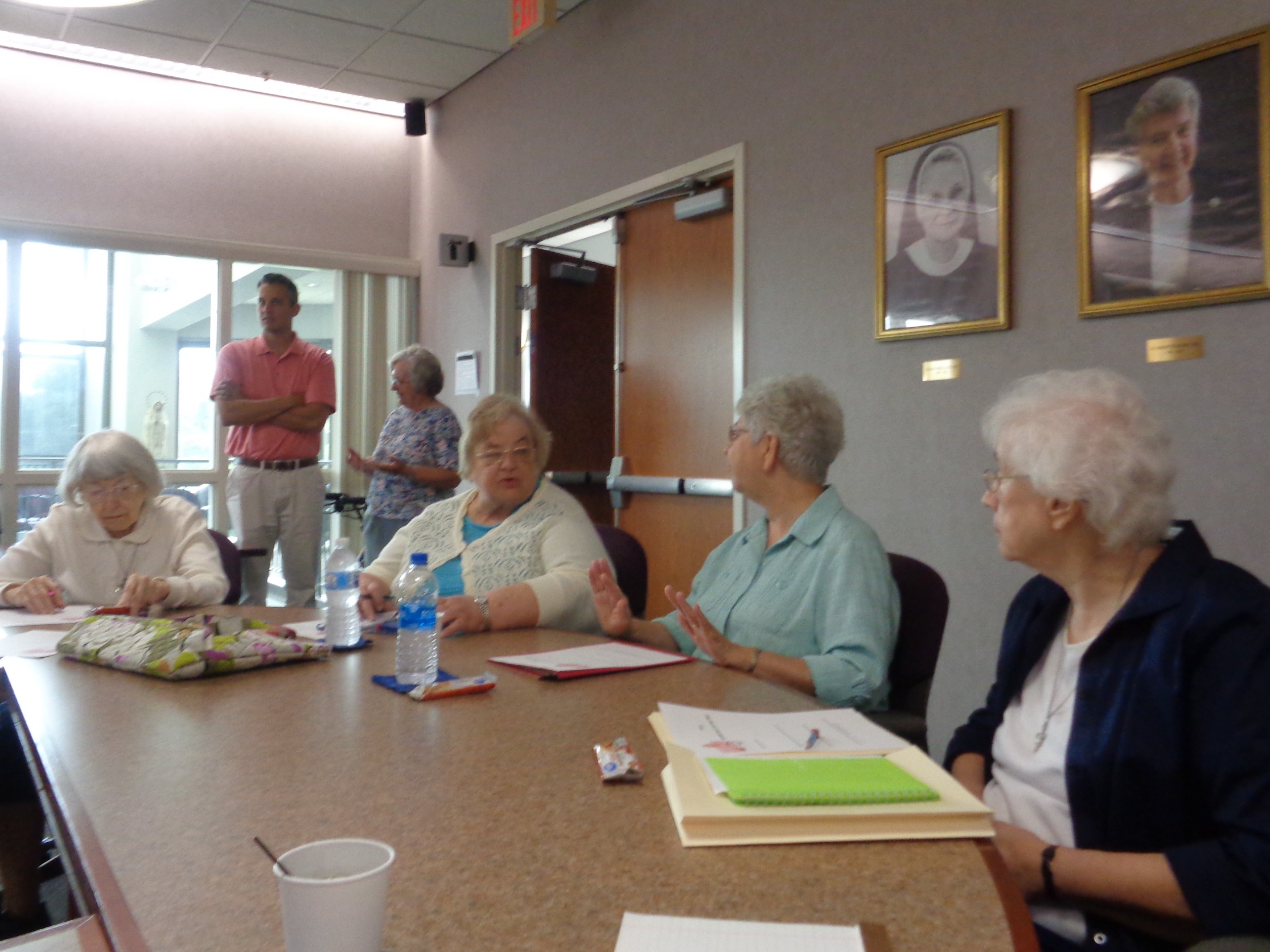 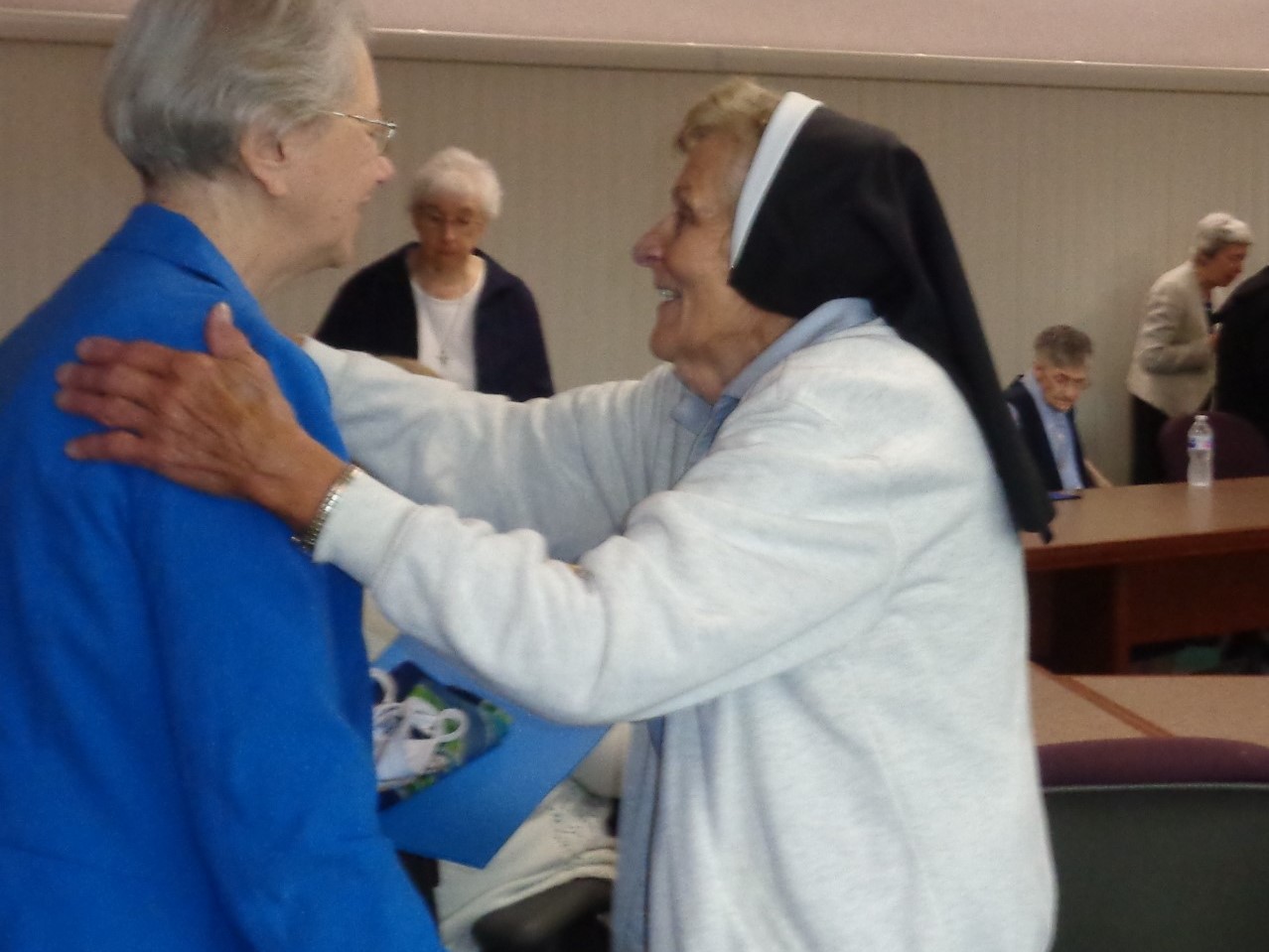 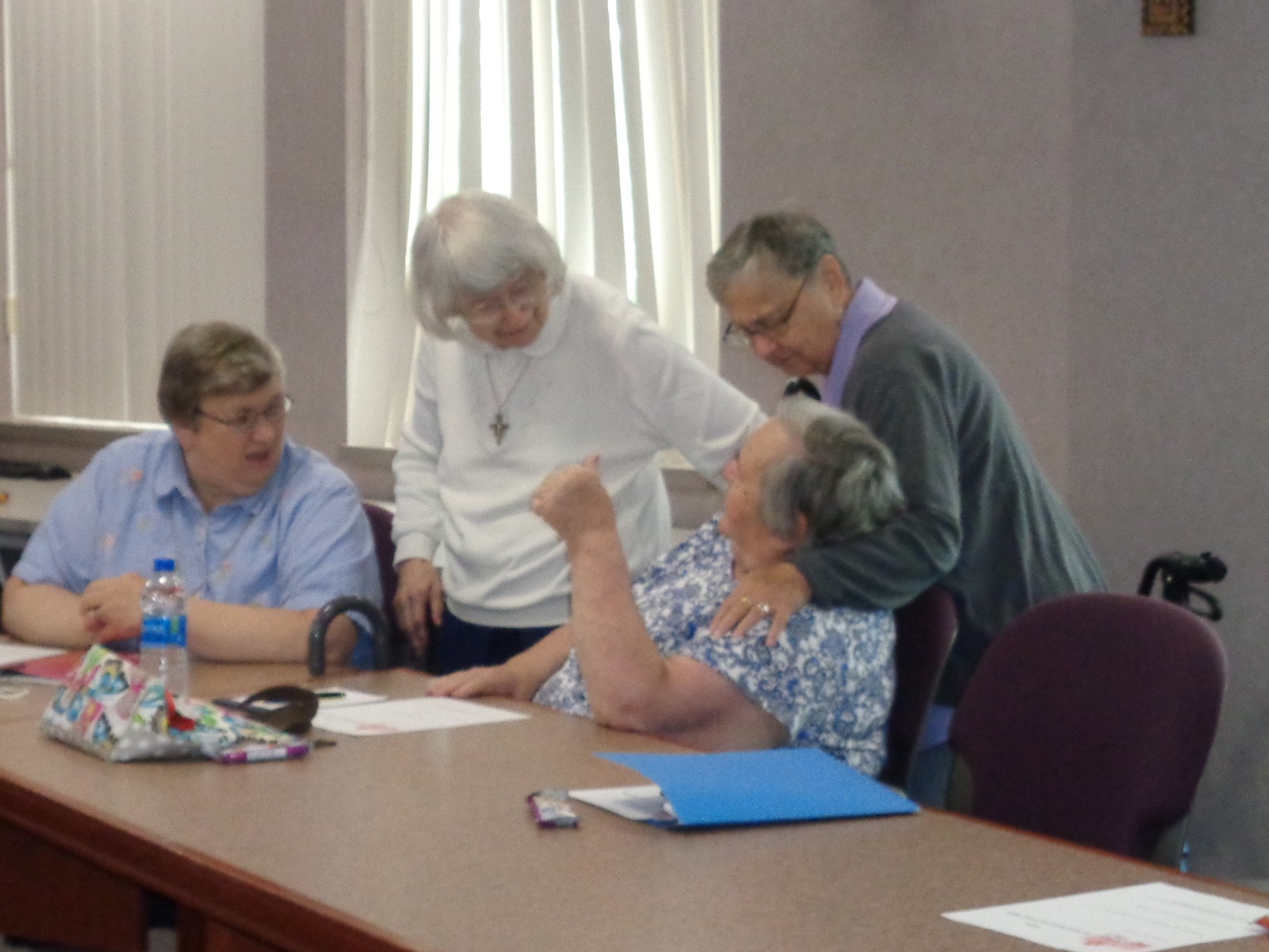 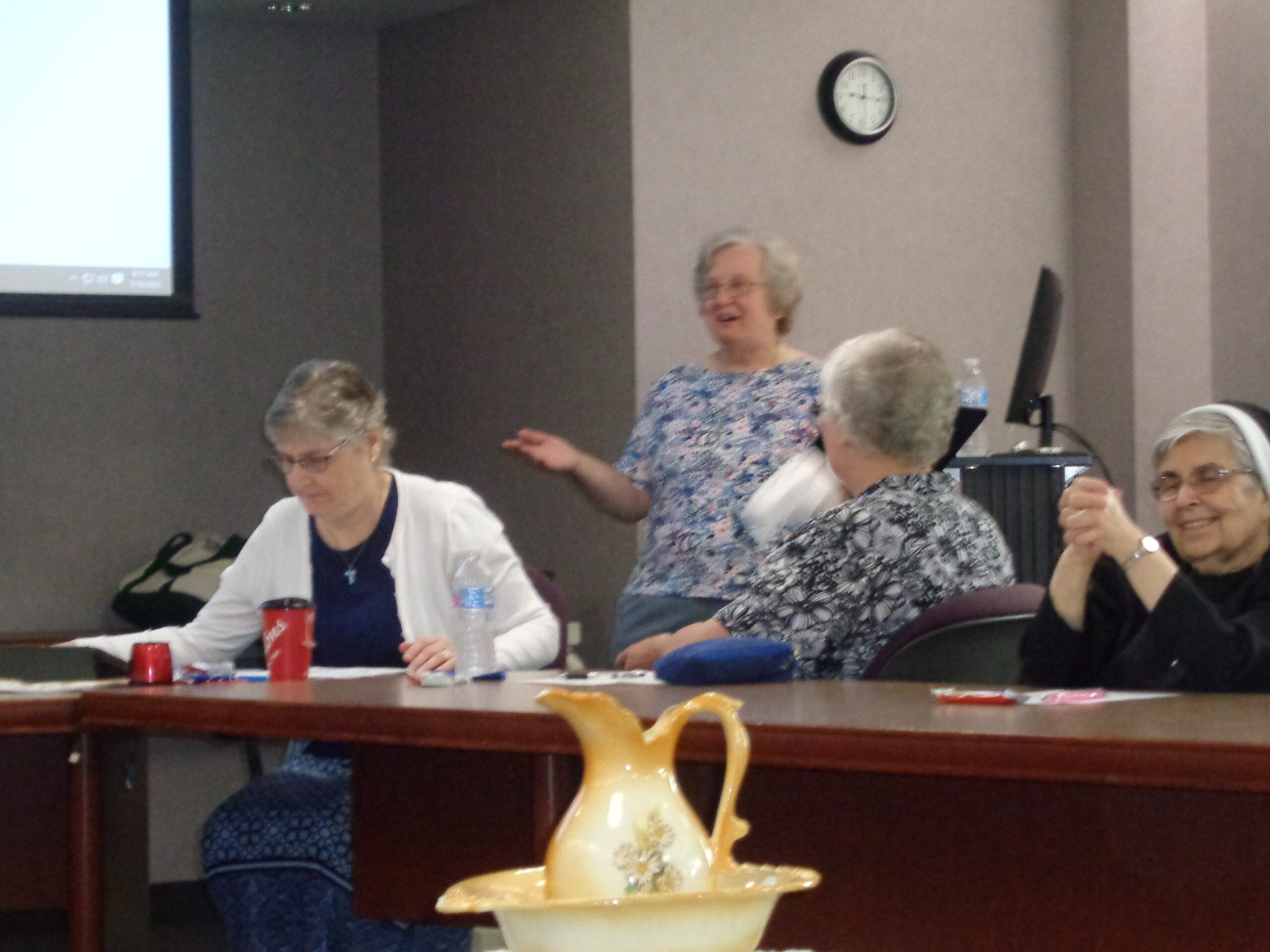 We gathered to pray over and discern our continued Spiritual Life, Mission, Community Life.  Reminding ourselves that we are called to care for all people and all creation.

God is with us on our Journey,

And God will never leave us. 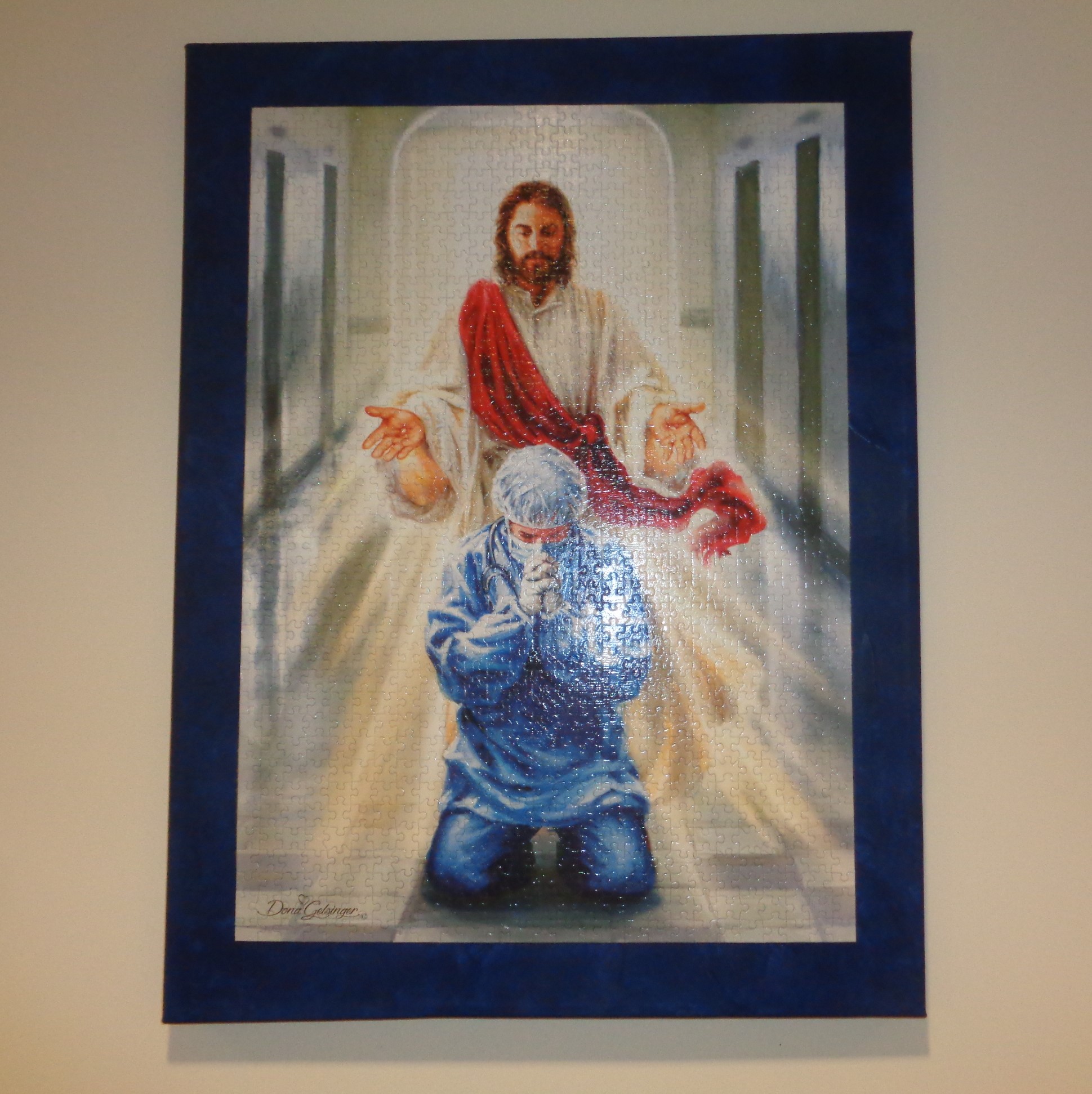 The Franciscan Sisters of St. Joseph are grateful for all those who have helped us to remain safe and healthy during the pandemic. In gratitude for all our health care staff has done for us Sister Deborah Marie Ciolek ordered a jigsaw puzzle with a picture of Jesus blessing a health care worker. After the Sisters put the puzzle together, Sister Lynne Anne Schimminger prepared it to be hung in the Care Community area of St. Francis Park as a gift to all the health care givers, nurses, Home Health Aides and Resident Care Aides. 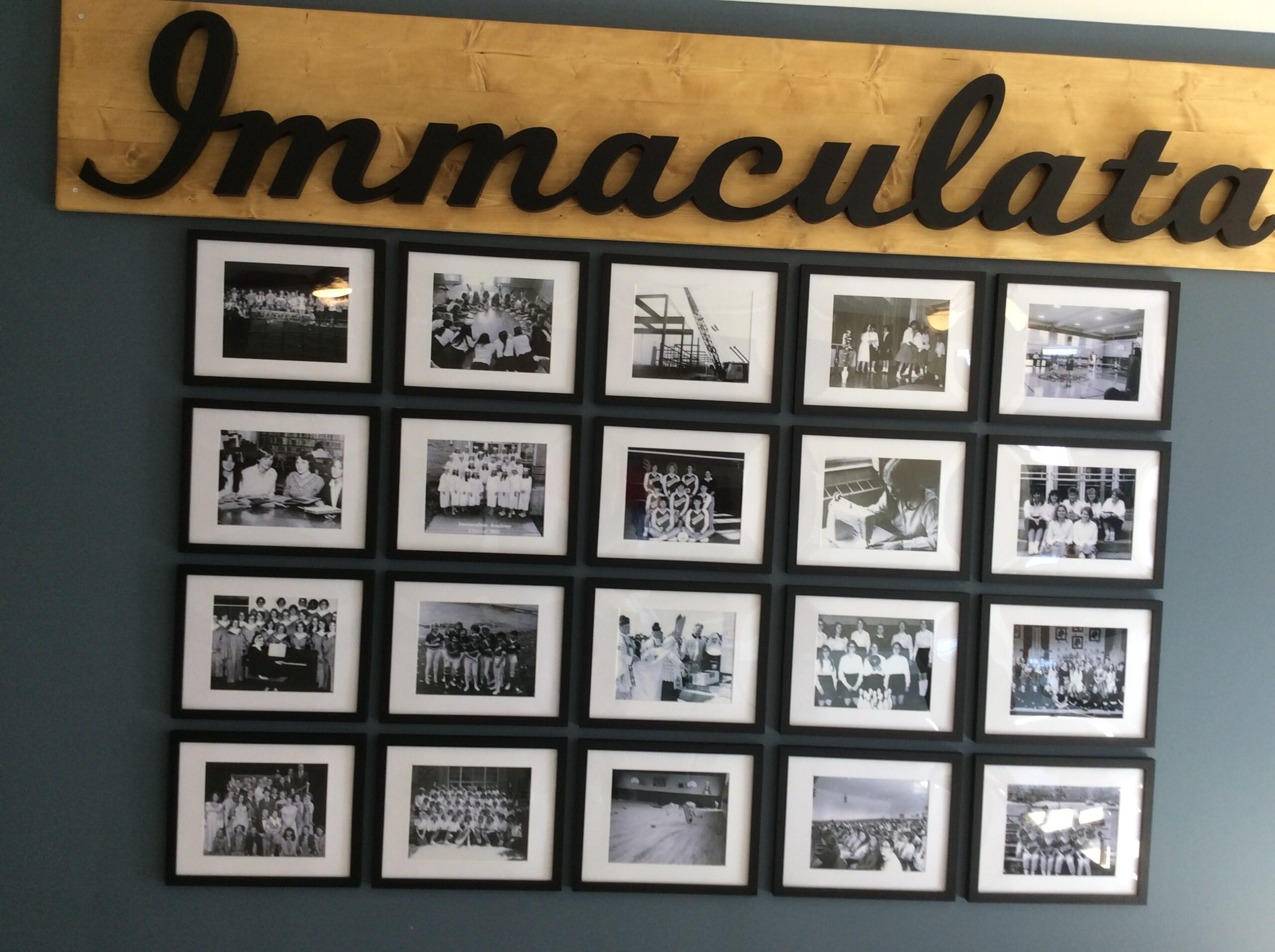 Immaculata Academy has New Life as The Oaks at South Park

For 88 years the Franciscan Sisters of St. Joseph served God’s people by educating young women at Immaculata Academy in Hamburg, NY.  They are grateful that the new enterprise, The Oaks at South Park,  pays homage to the history of the property while offering beautiful, private “carriage house style” luxury apartments that will provide safe housing.  For more information on The Oaks go to Home

The picture on the right is the cornerstone of Immaculata Academy with some of the articles found in it. 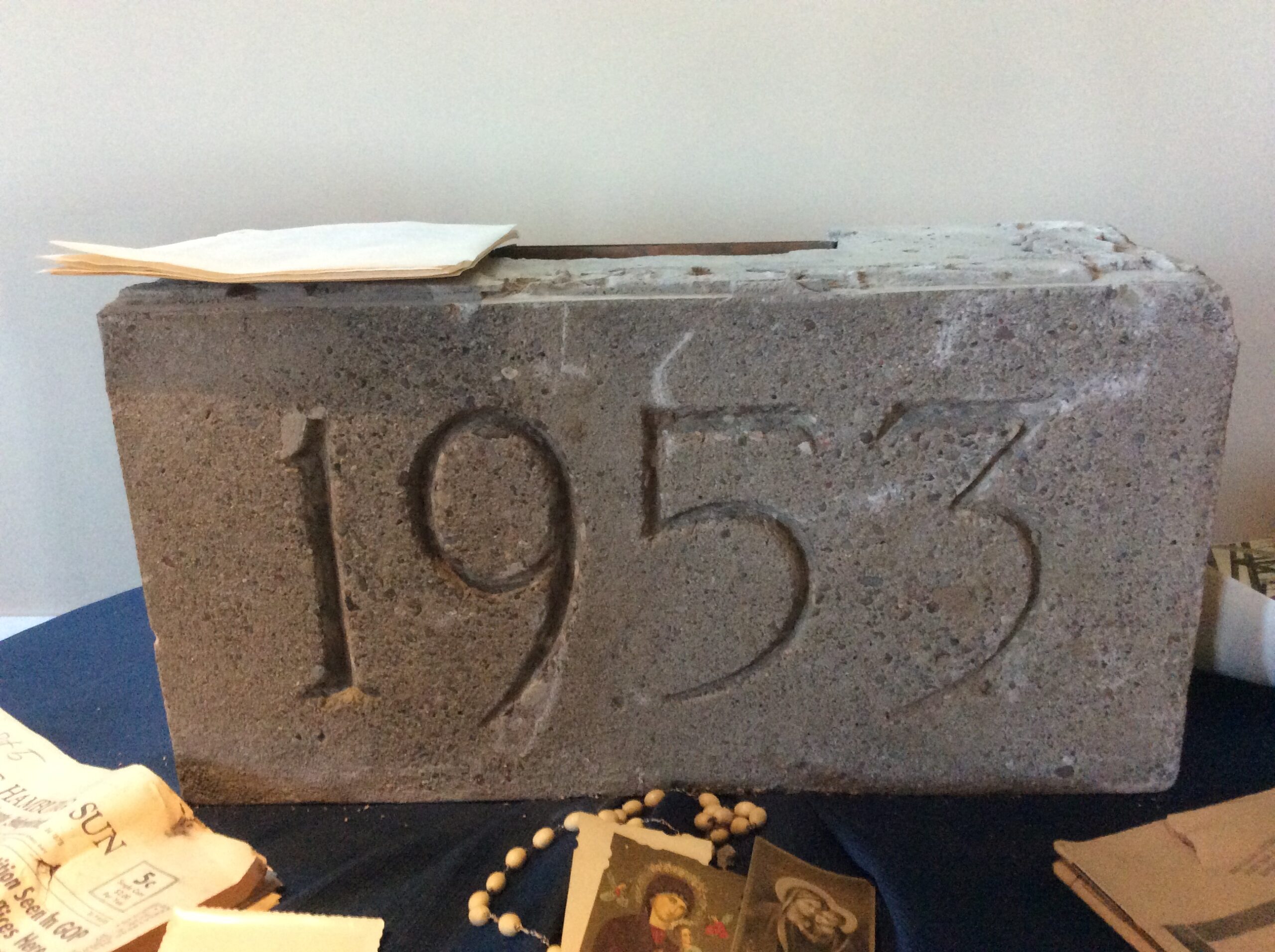 Earth Day at St. Francis Park: Resource table, ambiance in chapel and presentation on the why and how to recycle 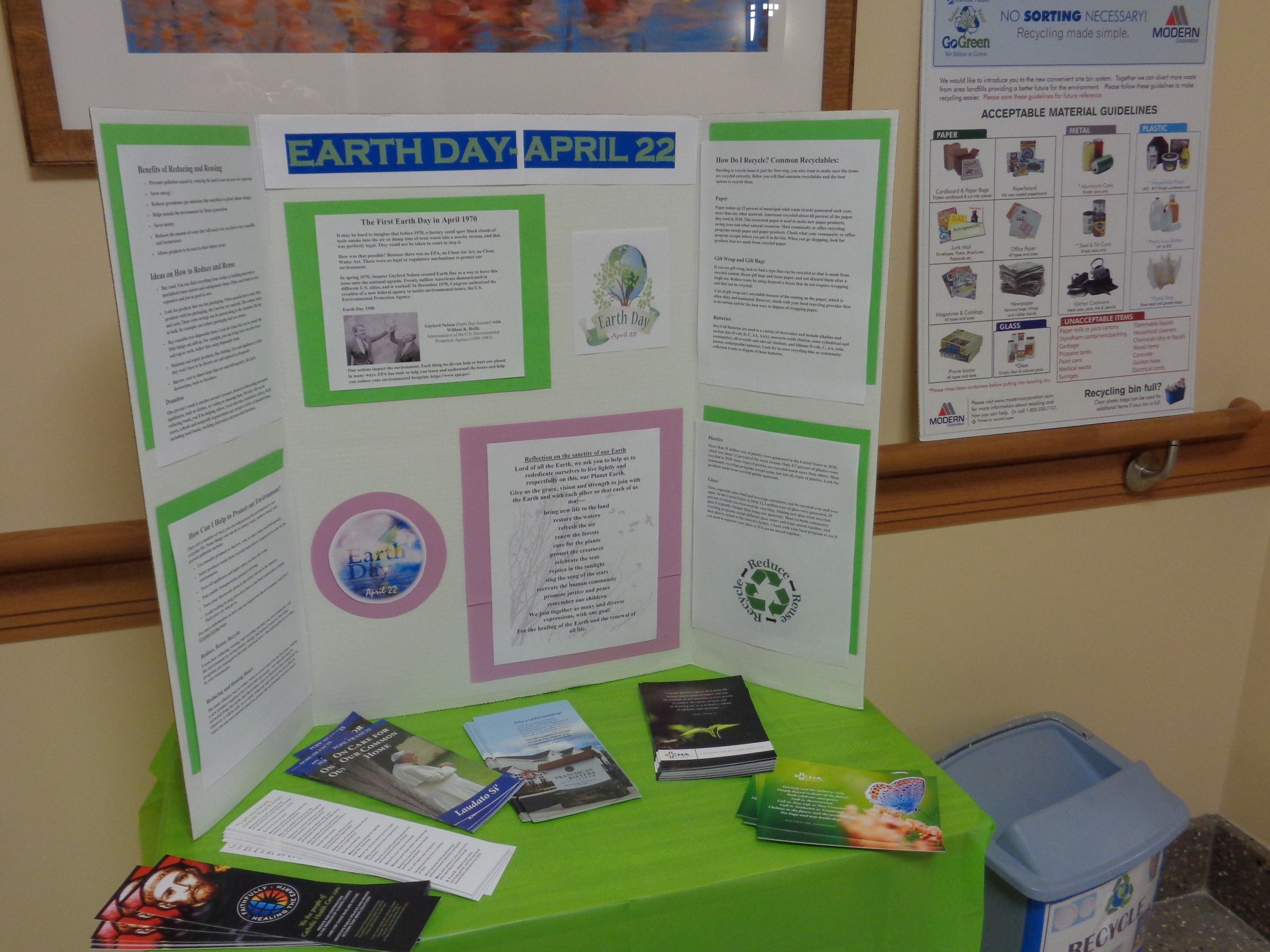 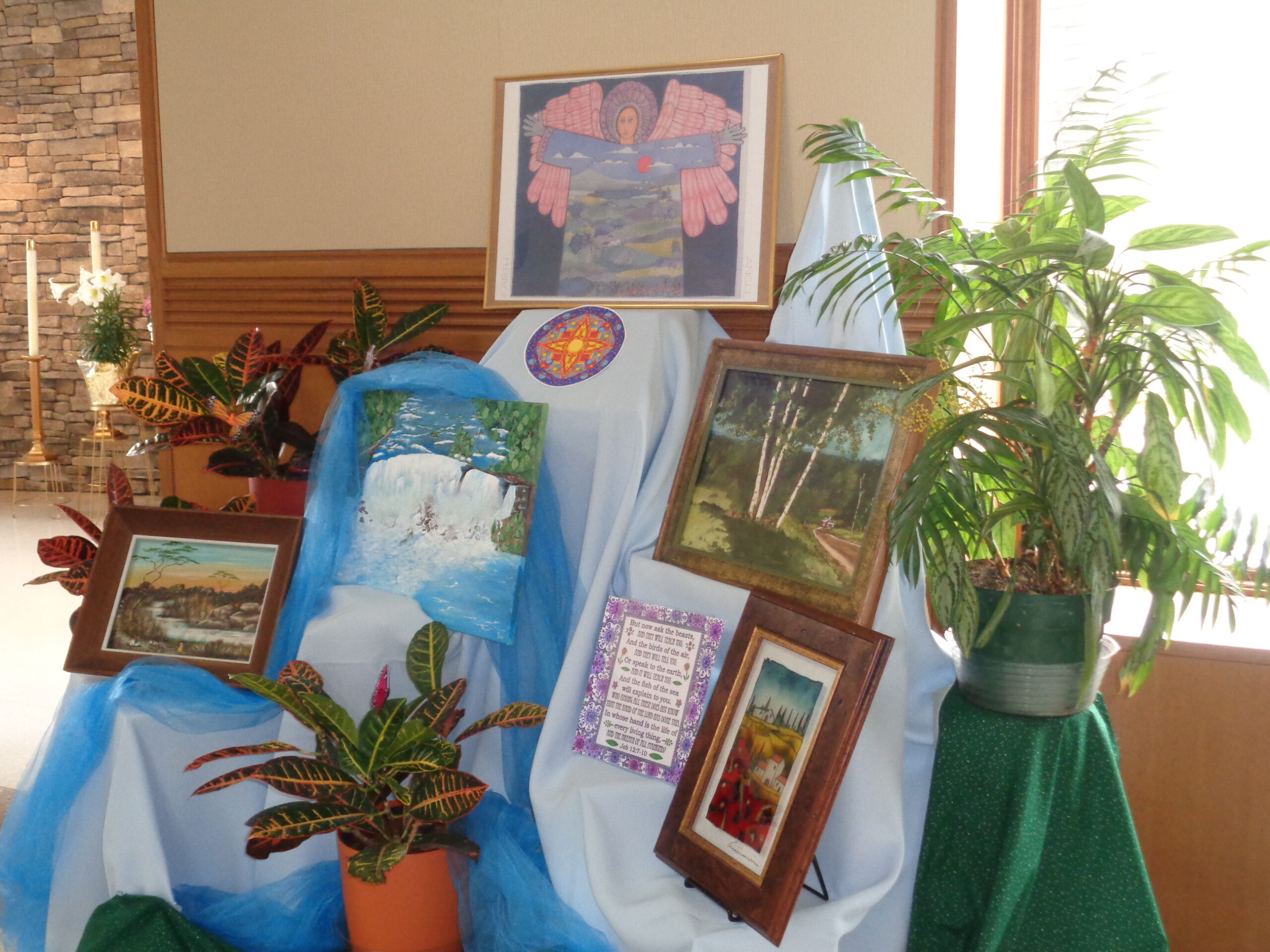 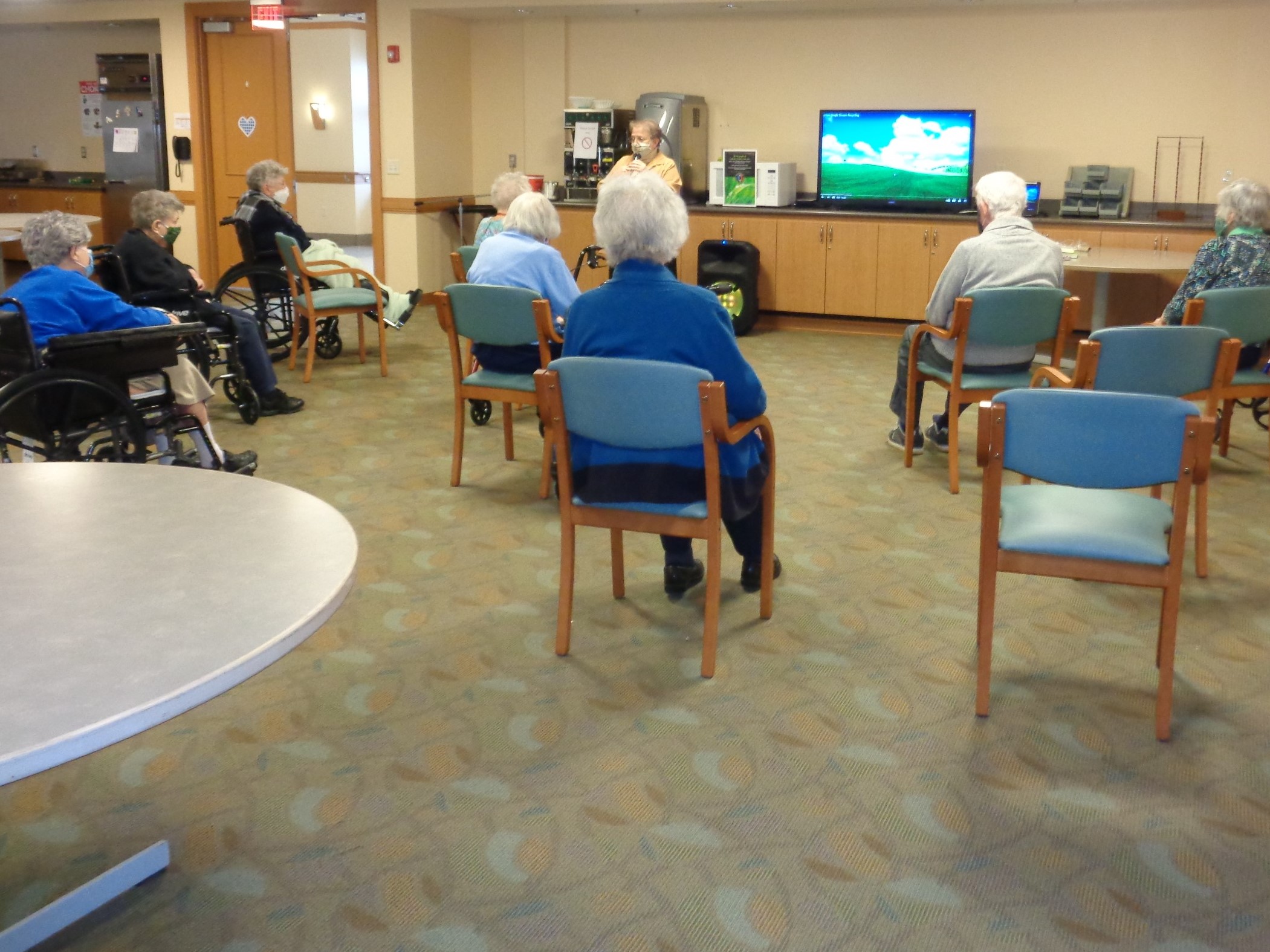 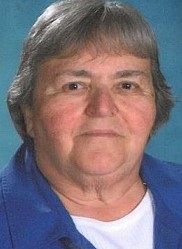 Sister Marcia Ann, General Minister of the Franciscan Sisters of St. Joseph, announced the appointment of Sister Constance Santilla, FSSJ, as the Global Concerns Coordinator for the congregation.  Sister Constance’s years of dedicated service in Brazil have demonstrated that she has a deep love and concern for those in our society who are underprivileged.  As Coordinator she will have access to information from the Franciscan Action Network, Leadership Conference of Women Religious (LCWR), U.S. Conference of Catholic Bishops and other organizations which she will be sharing with us.  LCWR has chosen to spend the next five years concentrating on systemic racism.  Its current resolution deals with the intersection of racism, climate change and immigration reform.  The community is grateful for Sr. Constance’s willingness to say yes to this position and is looking forward to advocating for those in need. 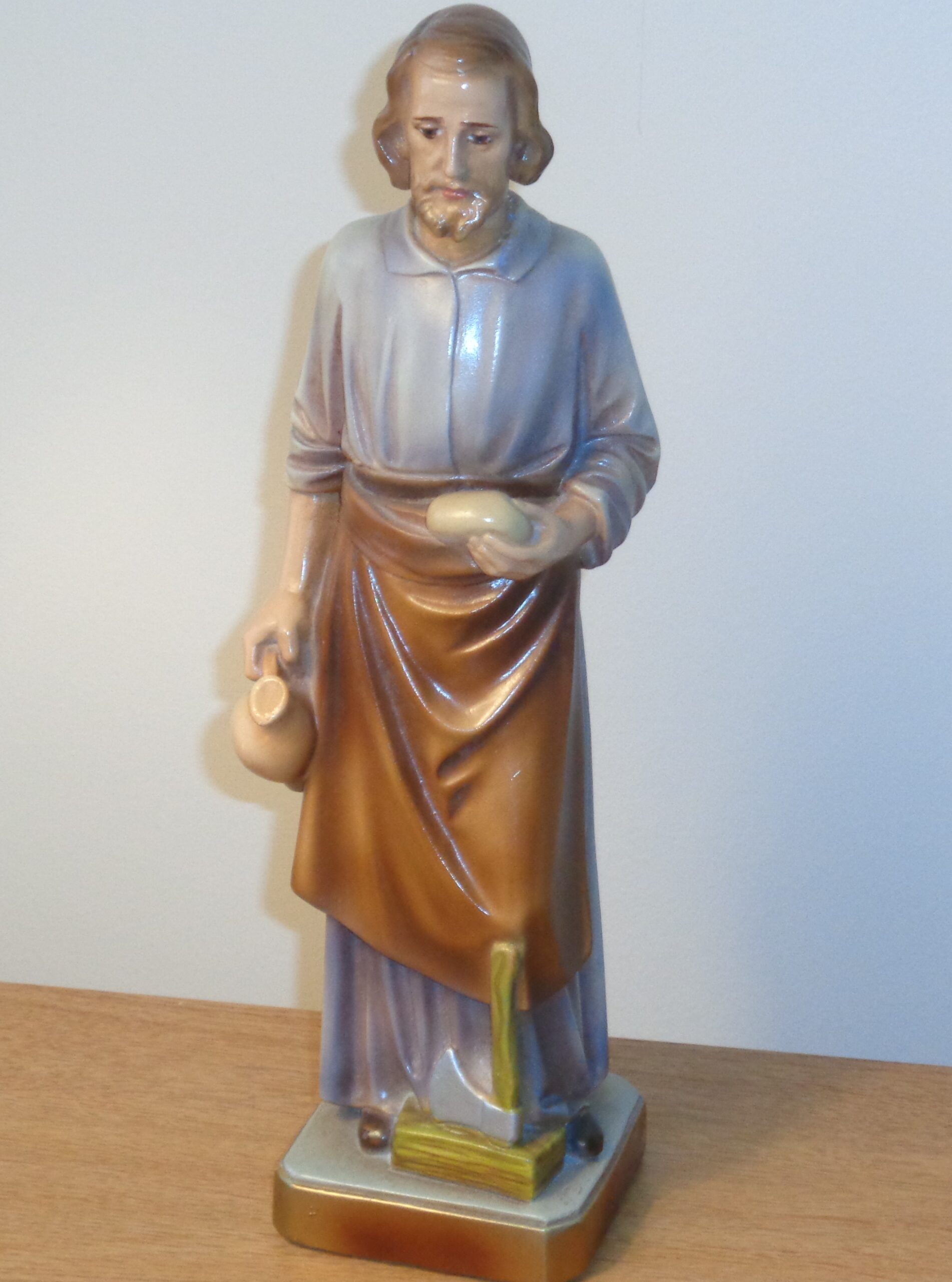 St. Joseph is Always with Us

The icon of St. Joseph to the far left is hanging in the dining room of St. Francis Park and was shared with all of us by Sister Ann Lyons, FSSJ.  The other is a picture of St. Joseph the Provider.  This statue was in one of the original homes that served as a convent for the Sisters when they started their teaching ministry at St. Joseph School in North Tonawanda.  Sr. Joyce Kubiniec, FSSJ, shared this. 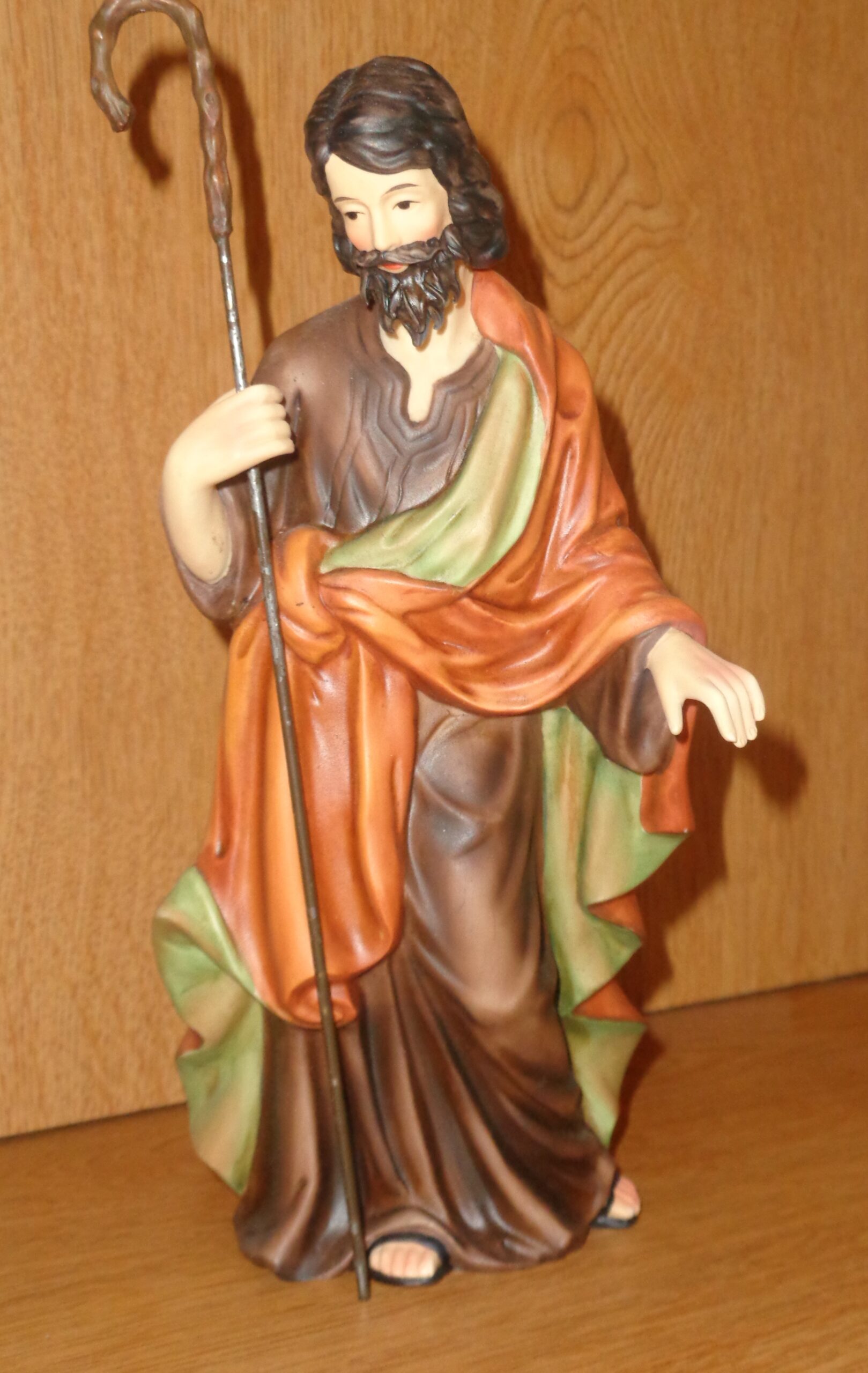 The statue on the left is one that belongs to Sister Emily Therese Bloom, FSSJ and is part of her collection of Nativity sets.

The statue on the right came to us when Sister Karen and Sister Loretta came to St. Francis Park from Trenton, NJ.  This was a special gift to the Sisters from a person who knew they both loved St. Joseph and that he is one of the patrons of the Franciscan Sisters of St. Joseph. 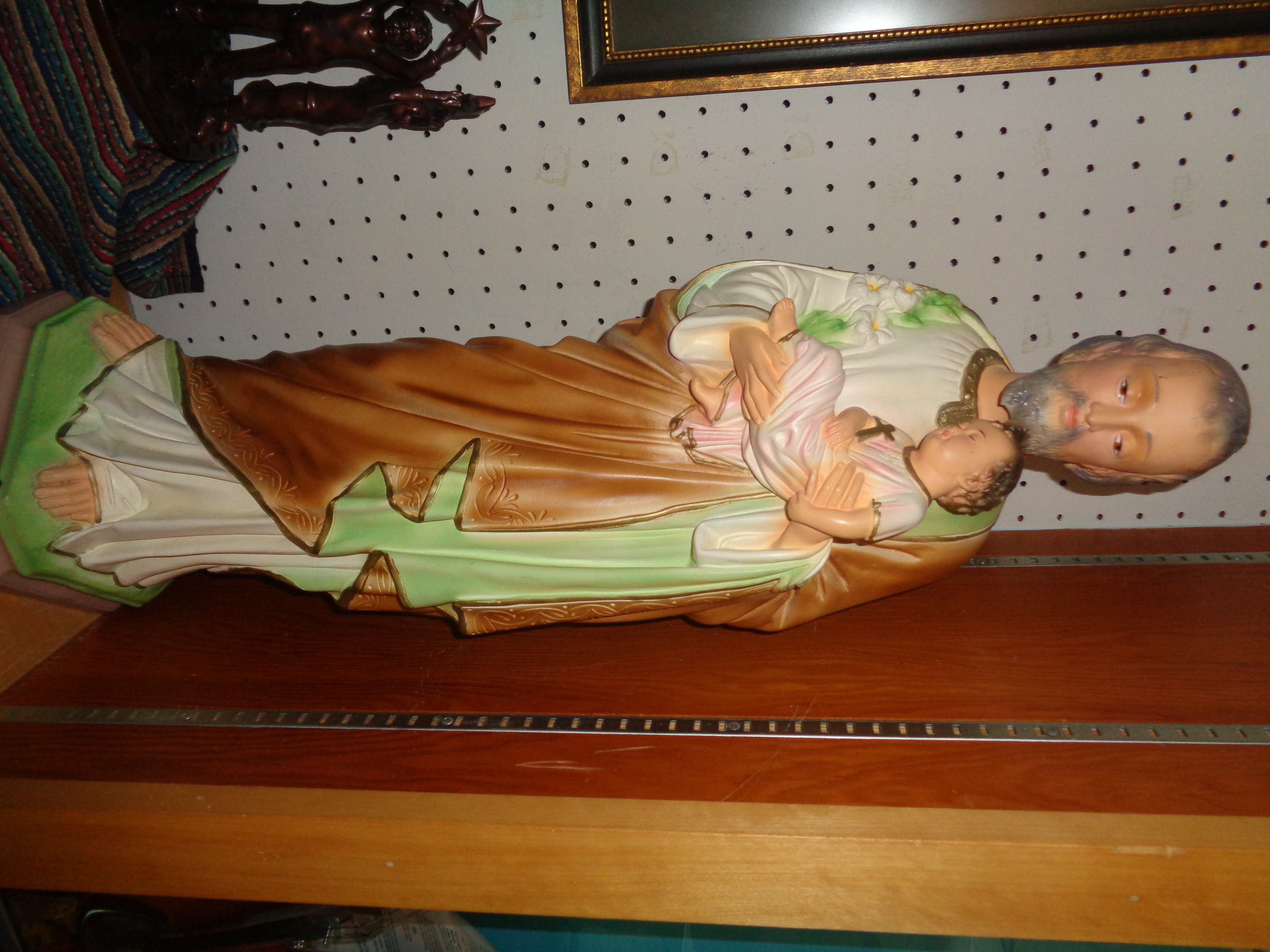 The picture on the left shows St. Joseph holding Baby Jesus shortly after his birth while Mary rests. 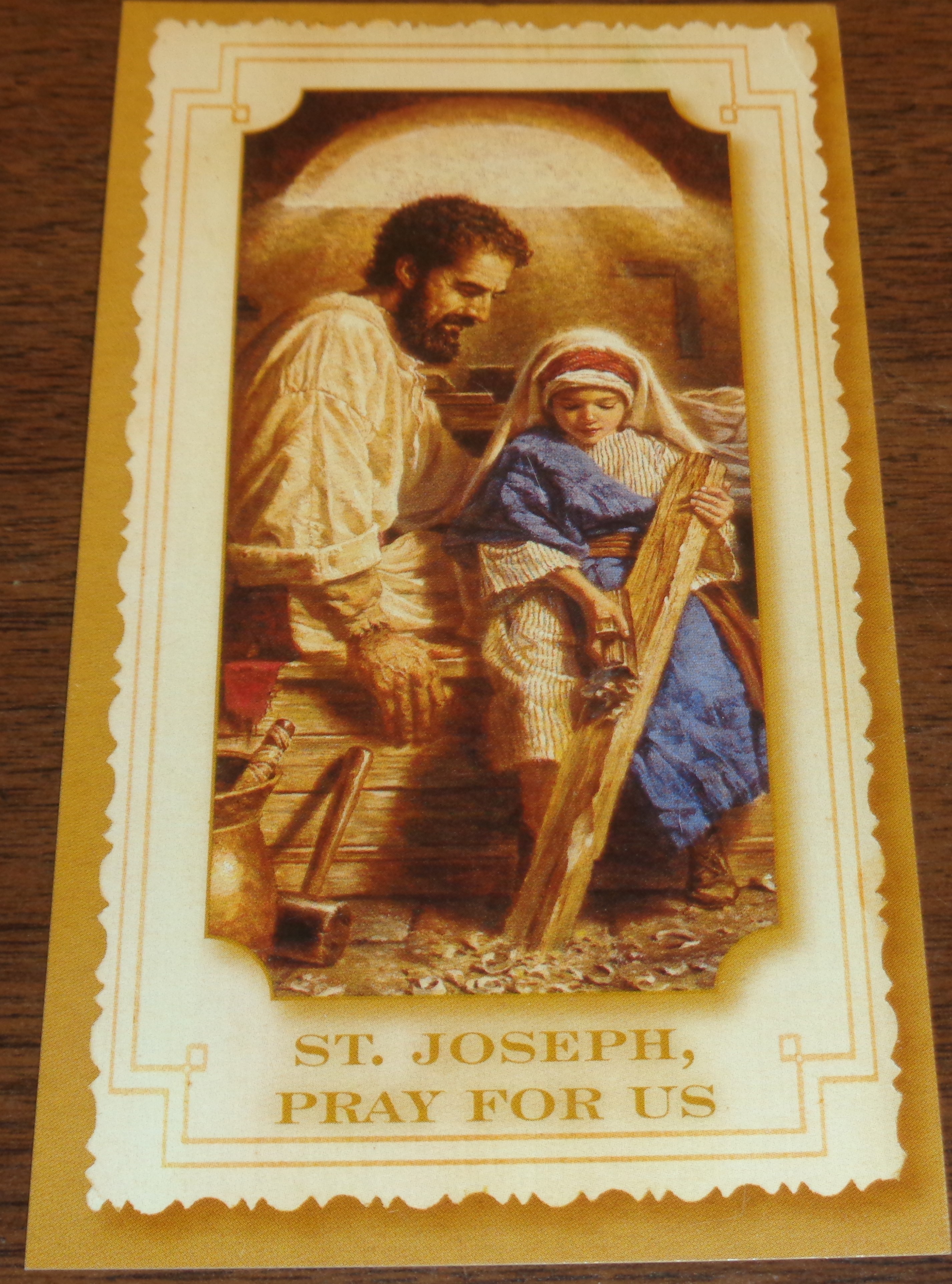 Hilbert College announced that a new baseball field and a new softball field has been named the FSSJ Field Complex, in recognition of the College’s founding congregation, the Franciscan Sisters of St. Joseph (FSSJ).  The FSSJ Field Complex, which is slated to be completed for the Spring 2021 season, recognizes the generosity of the Sisters, whose sale of the property adjacent to Hilbert’s campus specified that the fields would be made available for Hilbert’s exclusive use. 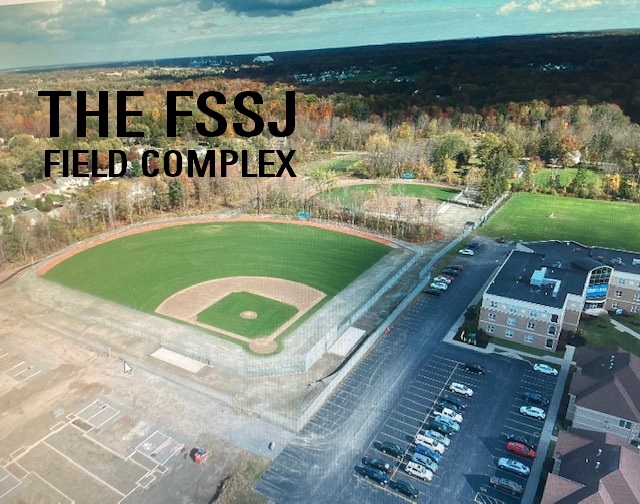 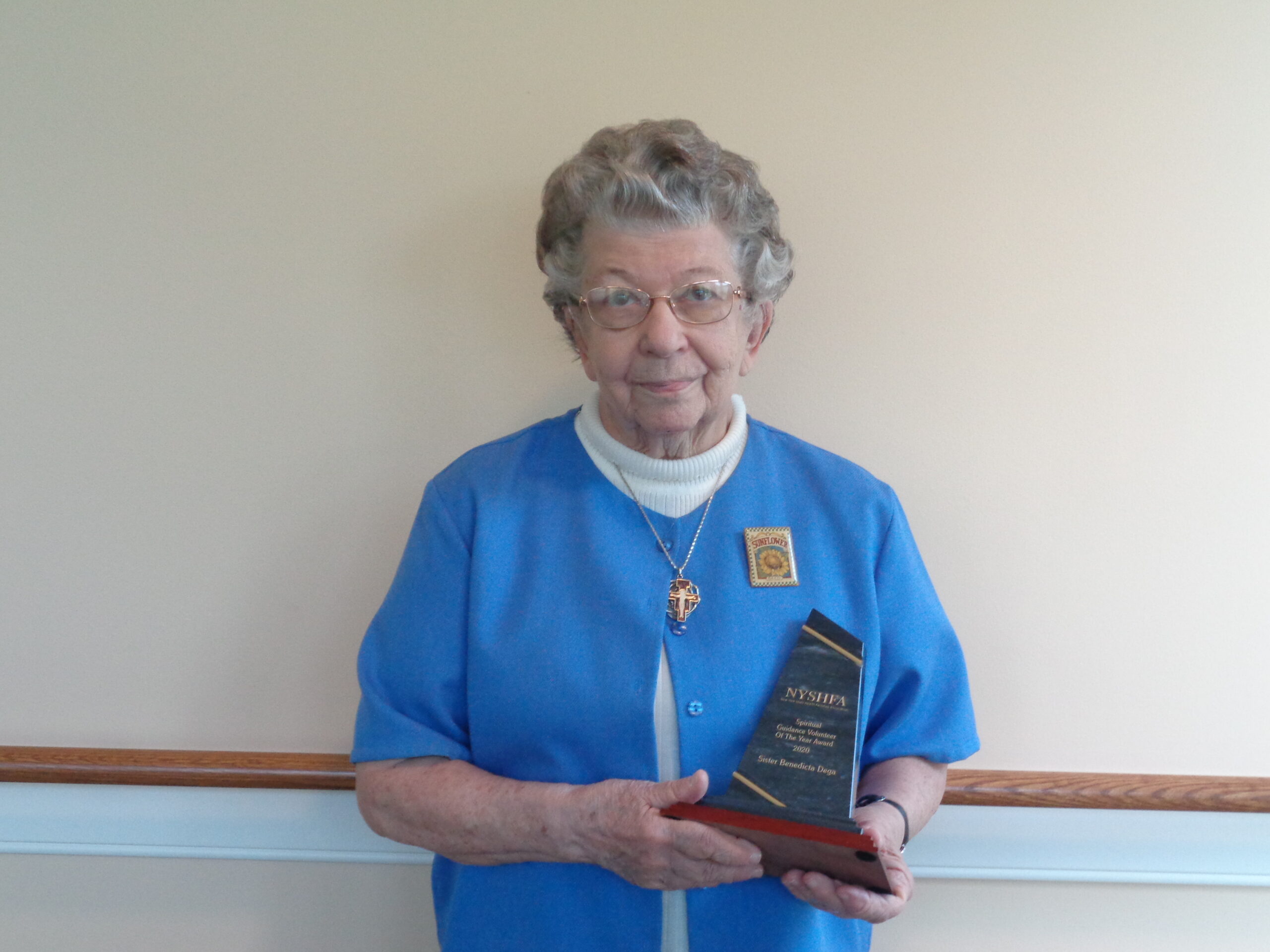 Sister Benedicta Dega, FSSJ, received her award for being named as the NYSHFA Spiritual Guidance Volunteer of the Year. Sr. Benedicta’s motto is: Following our foundress, Colette Hilbert, I model her saying “In All Things Charity.” Sister has volunteered at Autumn View Health Care Facility in Hamburg, NY since 2015. Sister visits the sick, prays with those who desire to be prayed with, and facilitates Bible study groups. The Franciscan Sisters of St. Joseph are proud and grateful for the Franciscan Spirit Sr. Benedicta shares wherever she serves God’s people. 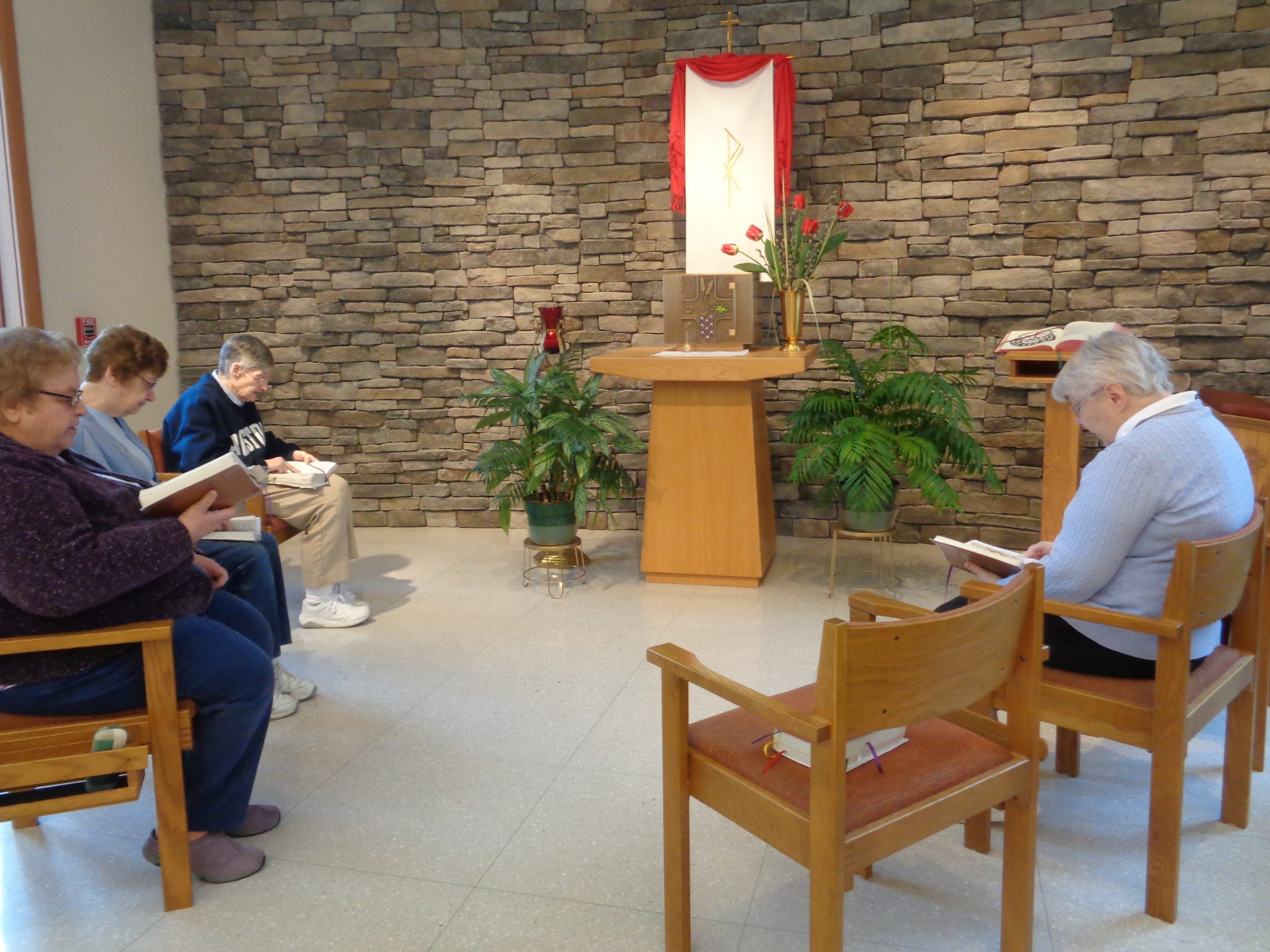 Each Franciscan Sister of St. Joseph is praying together or privately for our world at this time.  Some pray in Chapel, some in parlors.  Where or however we pray, God is with us.  Know that you and your families have us holding you tenderly in our hearts.

As St. Francis taught us by example, we not only pray when we pray together but our hope and our call is to “become a prayer.” It is something all followers of Jesus are called to do. 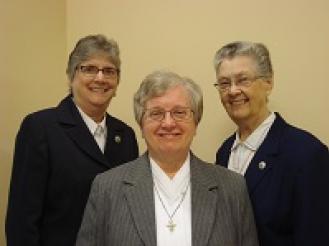 The Leadership Team of the Franciscan Sisters of St. Joseph was elected at the Congregation’s 22nd General Chapter in July of 2018.

The Leadership Team will lead the members in fulfilling their Chapter commitment which reads in part: We… Embrace our Sacred Journey…to explore ways to embrace full participation in our community life, new expressions for our mission, and hope-filled plans for our future. We welcome God’s invitation to co-create our future possibilities for the common good of God’s people. 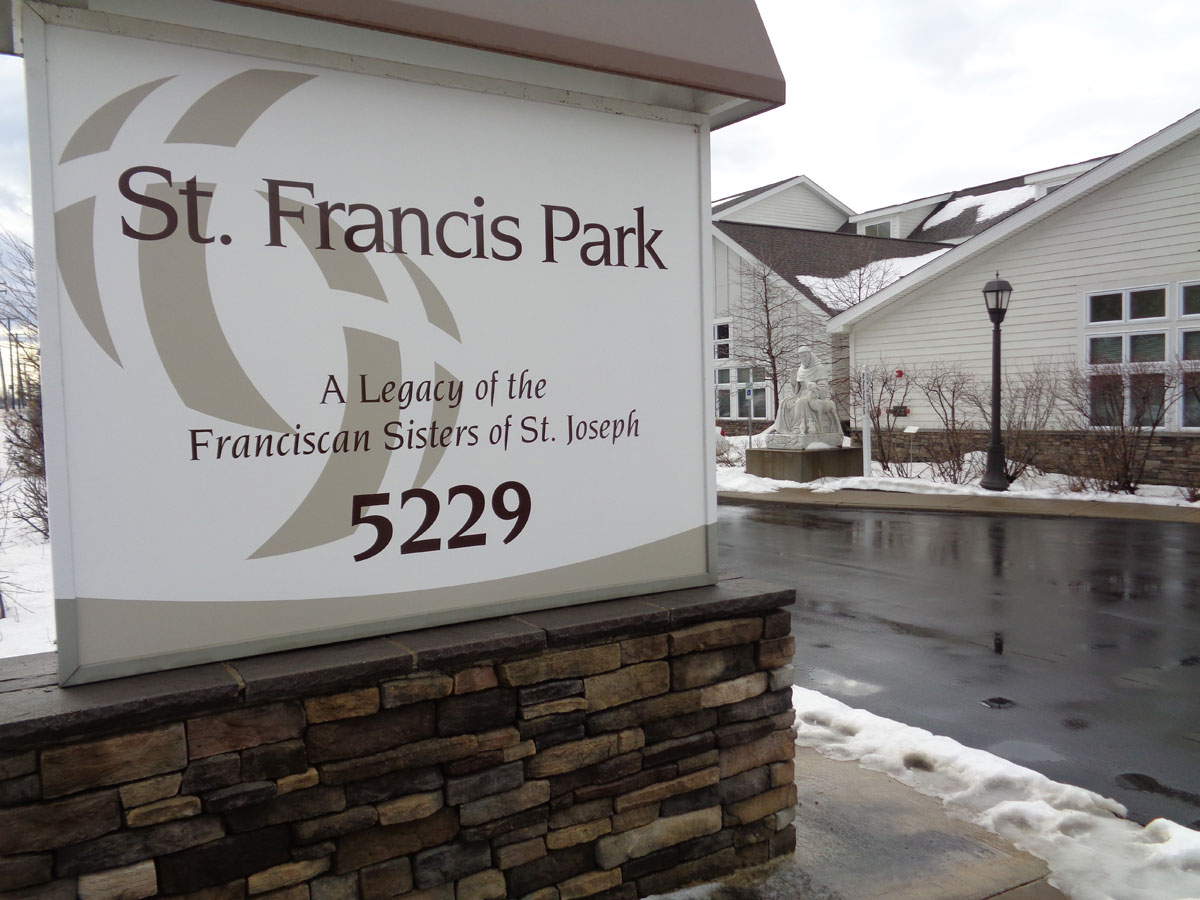 The Franciscan Sisters of St. Joseph have always been open to the Spirit of God and what God is asking of us at each time in history. In the 2000s the Sisters became more aware that we were being called to create a legacy of a new home – one that would be constructed in the Spirit of St. Francis’s love of creation and one that would allow us to open our home, our spirituality and our hope for the future to others. In 2010 the new Immaculate Conception Convent was built (LEED Platinum) at 5229 South Park Avenue, Hamburg, NY.

In 2018, Catholic Health purchased Immaculate Conception Convent and helped the Sisters’ vision become a reality with the opening of St. Francis Park, an independent living facility for seniors from all walks of life. We invite you to spend some time on this site to learn more.